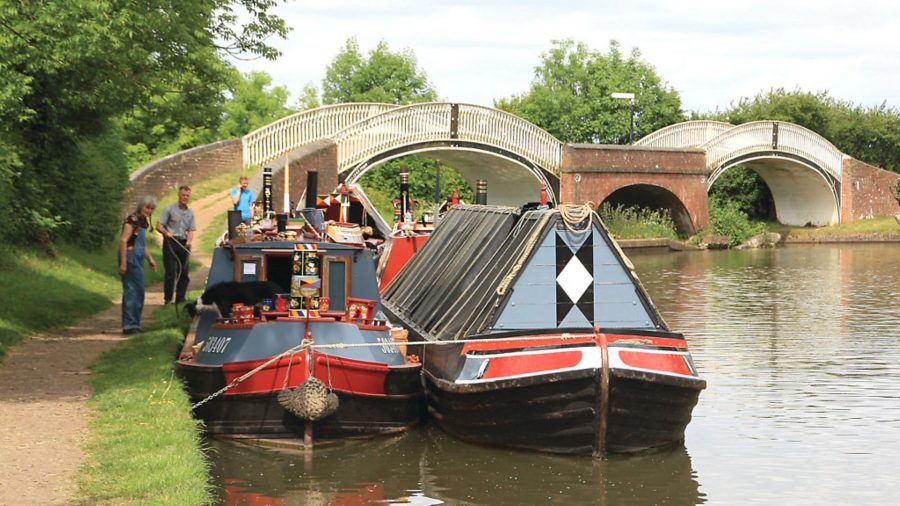 Following another successful Braunston Historic Narrowboat Rally this summer, we’ve put together a walk with a choice of distances, all of which take in this village at the heart of the canal system

In the canals’ working days, Braunston was a major junction where the Oxford and Grand Union met, a home to many working boat families, and an important centre for boatbuilding. Today it’s equally well-known as a centre for leisure boating, and especially for its annual Historic Narrowboat Rally attracting dozens of heritage craft – see our pictures below. But to the non-canal world, it’s a small and not terribly significant village that isn’t particularly well signposted.

So our walk begins not at Braunston but at Hillmorton, where the A428 Rugby to Northampton road crosses the northern Oxford Canal by the Old Royal Oak pub, and accessible by bus from Rugby Station. Where it ends is up to you: there’s a choice of everything from a six-mile ramble to a 15-mile hike – all of them taking in Braunston. And wherever you choose to finish your walk through Northamptonshire’s rolling countryside, there’s a bus to take you back to where you started (unless it’s a Sunday, when they don’t run).

I said Northamptonshire, but actually the first half-mile is in Warwickshire, as the Oxford canal follows a straightish course south westwards towards Onley. It wasn’t always this straight – you’d have had a lot further to walk if you’d made this trip in the early 19th Century, before the canal company carried out a drastic straightening and shortening of its circuitous route. You may be able to spot some of the bypassed remnants of the original route; you can certainly tell the difference between the narrow hump-back bridges and winding route of the surviving original lengths, and the bolder spans crossing the straight cuttings of the newer parts.

Look out for a new marina under construction on your right at Olney: the decision to build it was surrounded by controversy over whether there were too many marinas in the area, but the builders seem to be making a fine effort at building a replica Oxford Canal towpath bridge over the entrance.

You’ll spot the tall spire of Braunston Church a long time before you reach the village: partly because its hill-top site means it’s visible from a distance, and partly because the canal winds around the hill to get there.

Braunston Turn is the junction where you’ll cross a fine pair of bridges carrying the towpath over the start of the northern Grand Union Canal leading to Birmingham (whose route is combined with the southern Oxford Canal heading towards the Thames at this point). If that sounds a bit complicated, well, actually it’s even more so. Originally there wasn’t a junction here at all; just a sharp turn (hence the name). The Oxford met the (then) Grand Junction in Braunston village, before meandering southwards, westwards, northwards, and eventually resuming its south westward route and heading vaguely towards Oxford. This length was cut off in the straightenings, creating today’s canal junction, while a short length of the original route survives as the arm forming part of Braunston Marina.

The marina and all the other boating businesses on the canal around it make this a Mecca for canal boaters, while for walkers there are plenty of places for refreshment including two canalside pubs and more in the village. And once a year, it really comes alive for the rally.

If six miles walking is enough for you, the hourly No 12 bus from the village will take you back to Hillmorton. Otherwise carry on eastwards: you’re now on the southern Grand Union, which is a broad canal as you can see from the flight of six wide locks climbing out of the village towards Braunston Tunnel.

This 2042-yard bore was built without a towpath, which was bad news for horse-boaters who had to leg their craft through the tunnel while the horses walked over the top. The good news for today’s walkers is that the old horse path is still there, and easy to follow as it zigzags up the side of the cutting by the portal and then follows a straight course over the hill. Look out for small round brick structures near the path, which are the tops of tunnel ventilation shafts.

On the top of the hill, the path crosses the A361 road: if you’ve had enough after eight miles of walking, turn right here then right at the roundabout, and the 10 or 12 bus will take you back to Hillmorton. If you’re continuing, go straight across the road onto a farm track, from which the path diverges to the right after a short way, to be reunited with the canal by the tunnel’s east portal. A shady cutting continues for some way eastwards before opening out into quiet countryside which continues to Norton Junction.

Our walk takes a left turn here, crossing the canal by the bridge just before the junction. Alternatively if you fancy a short detour for refreshments, carrying straight ahead will soon bring you to Buckby Top Lock and the canalside New Inn. (There are twin towpaths from there to the junction, so when you leave the pub, cross the lock gates or the road bridge and return along the north side of the canal.)

Heading north from the junction, you’re now on the Grand Union Canal’s Leicester Line, which I was about to describe as ‘a quieter route’ – but perhaps given the proximity of the M1 motorway, A5 trunk road and West Coast Main Line Railway (all of whose builders took advantage of the same gap in the hills – Watford Gap) perhaps that’s not the best choice of words. However the tree-lined channel keeps up a rural appearance as it leads to Watford Locks.

This flight of seven locks limits the canal to narrow-beam boats, and (like its more well-known counterpart at the other end of the Leicester Line’s summit at Foxton) features a set of staircase locks, with the same cunning arrangement of sideponds to save water.

A footpath heading off on the right by the locks leads to Watford, and yet another opportunity to return to Hillmorton, this time on the No 96 bus (the stop is at the far end of the village) after 12 miles of walking. The footpath isn’t particularly clear, but it should be waymarked as part of the ‘Jurassic Way’ – so watch out for dinosaurs…

That leaves just the hardcore of 15-mile hikers to continue along the Leicester Summit as it meanders up a small valley for a mile an a half before reaching Crick Tunnel. Like Braunston this has no towpath, but unlike Braunston there isn’t a tunnel path either. Instead, take a sharp right uphill from the portal, then left to join a track which in turn leads to a small country lane. Turn left, then bear right where it meets a bigger road.

You can follow this straight into Crick village for refreshments and the 96 bus stop – but if you really want to end the walk properly, it’s possible to follow something close to the route the boat horses took. It took our researcher three attempts to find it, so follow the directions carefully…

Turn right into Boat Horse Lane (the clue’s in the name!) then where the road bends left, take a narrow footpath heading straight on between the driveways to two houses. This footpath then takes a sharp right turn (marked ‘Public footpath to West Haddon’). Follow this for another 100 yards or so as it runs along the side of a field, then passes through into a second field. Bear sharp left here, and the line of trees and undergrowth approaching from your right hand side mark the line of the canal cutting. Where this meets a hedge, a dilapidated stile gives access to a steep pathway down to the towpath. Celebrate your success in finding the route by following the final few hundred yards to Crick Wharf and ending your walk as it began, at a canalside pub – before taking the 96 from the bus stop opposite the marina’s road entrance back to Hillmorton.