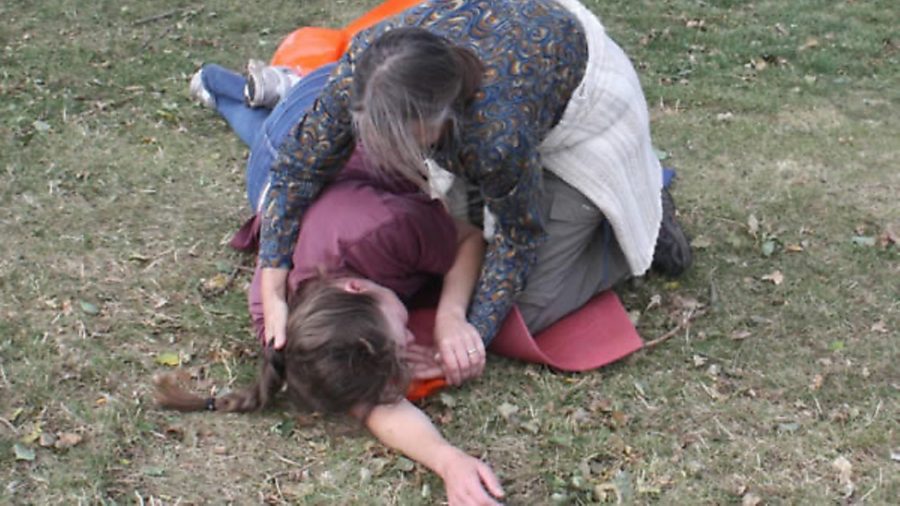 You hope you’ll never need it, but it’s reassuring to have some training in what to do if somebody’s injured or taken ill while boating – especially when the training’s geared specifically for the narrowboater.Anyone walking along towpath past the Canal Museum in Stoke Bruerne one day in early autumn could be forgiven for wondering what on earth is going on. Several people are lying on the grass apparently unconscious and in the process of being manhandled and wrapped up in blankets. Have they been overindulging at the Boat Inn? Or have they perhaps arrived a little early for the annual Stoke Bruerne at War weekend? No, this is the practical part of a First Aid course – and one of the first to be aimed specifically at the canal boater.

It begins conventionally enough, in the classroom behind the museum building, with instructor Jason Day introducing himself to us: a group of boaters taking his first course. Jason understands boating: he lives with his family on a boat; he and wife Viv are waterways and outdoor enthusiasts, whose interests include mountaineering, kayaking, cycling, and canal restoration with Waterway Recovery Group.

But there’s another side to Jason’s background. He nearly lost his daughter when she was one year old, and would have done if there hadn’t been someone around who knew about emergency resuscitation. This brought home to him very clearly the importance of a knowledge of First Aid – so much so that it led him to make it his career.

Given his interests, it was an easy step from there to teaching specialised courses related to outdoor activities, through his company Northern Lights Training. And that in turn led to this – his first course in First Aid aimed specifically at the narrowboater.

Having said that, there isn’t anything specific to boating about the first part. We learn methods for dealing  with an ‘unresponsive’ person, familiar to anyone who has been on a First Aid course: checking whether they’re breathing; putting them in the recovery position if they are; calling for help and starting Cardio-Pulmonary Resuscitation (CPR) if not.

Jason believes in plenty of practice rather than lots of theory and PowerPoint presentations, so he’s soon  got us practising putting each other into the recovery position and using CPR on his mannequins. And each time he teaches us another step, we go right back to the start when we practise it, so that before long we’re remembering his various abbreviations, initials and acronyms – “A, assess, awareness, airways, B, breathing…”

So far, so standard. But then he asks us “What if the patient isn’t lying on a classroom floor? What if they’re slumped against a tree stump on an exposed and uneven towpath on a cold winter evening? So that’s what we’re doing scaring the towpath walkers – we’re practising the same techniques, but on uneven ground and with the need to wrap the casualty in a blanket to keep them warm until help comes – which might be quite some time.

Then it gets a little more specialised. What if the person is unresponsive because they’ve been in the water and they’re close to drowning. It’s worth us knowing that a slightly different procedure is called for.  And then it gets even more canal-specific…

Back in the classroom, Jason gets a few benches, places them in two rows about 2ft apart and gets one of us to lie on her back in the narrow gap between them. “Your casualty is lying in the gangway of a narrowboat. How would you put her in the recovery position now? What if she stops breathing? How would you give her CPR if you can’t kneel alongside her?” It’s all perfectly possible, but it takes a little thought, you won’t find it in a standard First Aid manual, and it’s a lot better having it explained to you than having to work it out in a real emergency.

And then there’s the question of why the casualty is unconscious on the floor of a narrowboat. Might it be something you need to be aware of before you start trying to treat them, such as gas or carbon monoxide?

But the course isn’t just about treating an unresponsive person –  it covers injuries, too. Few of these are likely to be specific to boating, but the way to treat them might be different because you might well be some distance from the nearest road, with little or no mobile phone reception, so you might need to more than just stopping the bleeding and waiting for the ambulance.

So we learn the basics of how to splint a wound – and this is where I get my legs strapped together with two bandages, a woolly jumper and a couple of luggage straps. As you can probably guess from the jumper and the straps, Jason doesn’t restrict himself to what you find in a typical First Aid kit. Mind you, he’s a great believer in some of the standard items – for example the versatile triangular bandage, which can act as a sling, a narrow bandage, a wide bandage, a head bandage and more.

When it comes to First Aid kits, he doesn’t feel there’s really a ready-made one that gives you exactly what you want for a boat  – and therefore recommends that you make up your own First Aid box. Except that he suggests you don’t use a box at all: instead, use a bag – it can double up for putting around a hand or foot, or even for fetching water if you’re treating a burn.

Getting back to canal specifics, we ask what to do if somebody falls in. His answer is “look after yourself, and keep out of the water if you can.” You won’t be much help to the casualty if you go into the canal and get into trouble yourself, so try to pull them out. But (especially if they’ve been in for a long time), don’t drag them out just by their arms – it might well put them into shock. Roll them out by their arms and their legs. And, if the water’s cold, it’s useful to know how long they’ve been in – it’s best for them to warm up at the same rate they cooled down.

Recognising the age of many boaters these days, Jason finishes up by telling us about the signs and symptoms of heart attack and stroke, as well as the possible effects of asthma, diabetes, and allergies to insect stings, and how to recognising overheating and hypothermia.

We leave with a qualification, a certificate in the post, and (certainly in my case) a lot more confidence about knowing what to do if an emergency arises while I’m out boating.

As well as First Aid training, Jason believes that there’s a lot more that can be done to prevent boating accidents turning into boating tragedies – and he has plenty  of ideas. How about printing some signs that First Aid trained boaters can put in their cabin windows when they’re aboard: ‘First Aider on board, please call if you need help’.

And then there’s the issue of emergency services finding their way to boating locations. There aren’t many who’ll know where to go if you tell them you’re “tied up by Limekiln Bridge”. The emergency services around the country aren’t consistent – some can take an Ordnance Survey national grid reference; some a latitude and longitude reference; others need a postcode – so how do you find the postcode for Limekiln Bridge? You could waste a lot of time finding a farm and asking them their postcode. It’s OK if you’re in a position to check with the various online resources – but that won’t always be the case. So Jason’s hoping to get together with people such as CRT, Nicholson’s Guides, and those producing online canal route planning guides, to set up a list so that wherever you are you can tell the emergency services.

Jason’s also hoping to run more courses – but can only do it if enough people book them: after all, this is his job, and he has a family and a boat to support! He can tailor them further to suit his trainees’ needs: he’s already planning one for a canal restoration group. If your boat club, canal society, IWA branch or other group has enough people and can find a suitable venue, feel free to get in touch – you might just learn something that you’ll be very glad of one day.