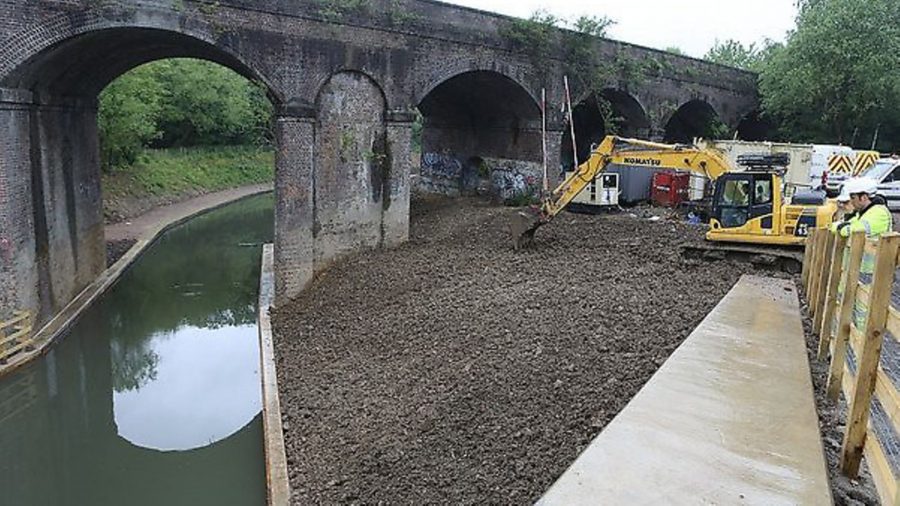 We make no apology for returning to the Cotswold Canals again: these are interesting times, with a spectacular piece of canal engineering almost complete – and elsewhere, volunteers returning to keep things moving forward

Just east of Stroud, a brand new length of canal is nearing completion – as you read this, it may even have water in it.

A couple of years ago, if you walked east along the part-restored Thames & Severn Canal, you would find that it passed under the town’s bypass, Dr Newton’s Way, before coming to an abrupt stop near a railway viaduct across the valley. There was no sign of any continuation: just a steep semi-wooded slope to the River Frome.

The canal began again several hundred yards on, crossing the river on a low aqueduct before continuing up the valley.

Now, the valley side has been laid bare, and a stark new concrete channel is taking shape. I’m being shown around the work site by Steve Dowling of Halcrow, the engineering firm which is linking those two dead ends together. It’s the most complex task on the £20m-plus Lottery-funded Cotswold Canals Phase 1a scheme to open from Stonehouse to Brimscombe Port. And one of the biggest single canal engineering jobs in the country in recent years.

So why is it such a major exercise? As Steve shows me the west end of the site, one of the main reasons is clear to see. The viaduct consists of a series of brick arches plus two flat metal spans: one crosses the river, and one spans Dr Newton’s Way – on a tight skew. That one used to cross the canal, but was ‘stolen’ in the 1980s for the road. It could have been worse: at least a bridge was built to take the new road over the canal, so the canal could be reinstated later by using one of the other viaduct arches. Today that might seem like bad news for restorers; back then, it was a major victory in getting any provision for the canal at all.

So that’s what’s happening today. From where the canal used to end, we can see it’s been extended, with a steel piled bank topped by concrete on the south side, and a puddled clay slope to the north. It turns sharp left and heads for one of the viaduct arches – conveniently, one built on a slight skew to take a former mill stream, so the bends don’t have to be quite so tight.

Here, it changes from a traditional canal profile to a modern reinforced concrete trough. Steve and his fellow engineers call it a U-section, but it’s actually a flat bottom and vertical sides, heavily reinforced with steel mesh which links sides and bottom together. A section of the base is ready to be cast: the reinforcing is in place, and we can see the tops of the supporting piles which reach down into the ground underneath it: they have been hammered in until the amount of resistance indicates a solid base.

Another tight turn takes the new canal to the right along the foot of the valley side – and on our left, a high retaining wall supports the earth above it. It’s built of concrete piles, which were cast in the ground. The earth was then excavated leaving a rather odd residue: in the narrow gaps between piles we can see bits of old metal, tin cans, plastic bags, and so on. This was the town tip: Halcrow has had to build a canal through several decades of Stroud’s rubbish: another reason it’s a tricky job.

Well, not quite straight through it. The cost of removing it, tunnelling under it or constructing a cutting through it would have been phenomenal, so instead the new route is cut into the downhill edge of the tip, close to the river. Even that’s not easy: it’s weak, unstable ground; it’s a steep slope; there’s little gap between the tip and the river. Hence the need for a strong reinforced concrete channel, deep piles supporting it, and the retaining wall, anchored through the old rubbish into solid ground beyond by over 50 long metal rods embedded in grout.

We walk along the new channel, as it bends to the left and narrows to around 20ft at the tightest point. It then widens out to give space for boats to turn, as the final tight corner bends 90 degrees to the right, on to the restored aqueduct over the river.

It isn’t pretty: it’s a lot of bare concrete channel and ugly piling. But it’s impressive engineering, and it works. Some landscaping or ‘cosmetic’ covering to help it tone in will come later when there’s more funding.

And that brings us to the second theme of this article. A lot of the work on the Phase 1a length is complete: Ryeford Double Locks are rebuilt; Ocean Swingbridge, Stonehouse has been installed; the new Stroud Brewery Bridge opened last year. Work starts soon on Dudbridge Locks, then Wallbridge Lower Lock. But then the cash starts running out – with relatively little done on the upper part from Bowbridge to Brimscombe.

Why? Has the work gone over budget? No: the problem is with the funding, not the cost. When work was being planned, the economic downturn was in the future. Brimscombe Port, a former trans-shipment basin now occupied by light industrial units and a car park, was set for regeneration. The developers were expected to see it as sufficiently lucrative that they would sign up to planning agreements to finance the restoration not just of the basin but of the adjoining lengths of canal from their profits.

Given the economic situation then, this wasn’t unreasonable. Now, it’s a struggle to get anyone to redevelop the basin at all, let alone to pay to restore the canal too.

Abandoning the Phase 1a restoration incomplete wasn’t really an option: the Heritage Lottery Fund might well take a dim view, given that its grant was dependent on the remaining money being raised from other sources. And it wouldn’t bode well for future phases of the restoration.

Fortunately most work had been done on the lower length, so that with the available funds, boats will at least be able to get from Brimscombe to Bowbridge. And between there and Brimscombe there are no huge engineering works. There’s a slightly tricky job getting over the river, under a road, and into the basin – but apart from that it consists mainly of restoring five locks and clearing the channel (and in some places excavating it where it’s been filled in).

One of those five locks – Goughs Orchard – has already been rebuilt by volunteers. The other four locks and channel repairs would appear to be mainly within the capabilities of volunteer labour. So last year, Cotswold Canals Trust’s team started on Griffin Mill Lock, and Waterway Recovery Group supported them with summer camps.

This has now led to a further mobilisation of visiting volunteers. A scheme called ‘Dig Deep’ (a collaboration between WRG and other mobile groups) which had been in abeyance has been reactivated, and will ensure that work progresses with regular weekend work parties all year. An Easter camp planned for the Lichfield Canal which hit problems (it was too cold for concreting) was relocated to the Cotswold Canals. Two week-long camps are planned for summer. And 2014 will see more of the same.

Work on Griffin Mill is well advanced; Ham Mill Lock should make progress this year; Bowbridge will follow on – and, meanwhile, a local volunteer team is working its way up the valley rebuilding the towpath. The final lock, Hope Mill, may prove a little trickier as it’s buried so they’ll have to find it first!

Progress won’t be as fast as if it had been carried out by engineering contractors, but the volunteers will keep it moving forward. For the longer term, there are hopes of a replacement of one or both of the railway crossings which block the canal at either end of the Phase 1a length. And a revised bid to HLF for funds to re-link it to the national network at Saul is planned.

Despite the setbacks, the prospects are good that the impressive engineering taking place by Capel Mill Viaduct will one day be at the heart of a restored waterway.