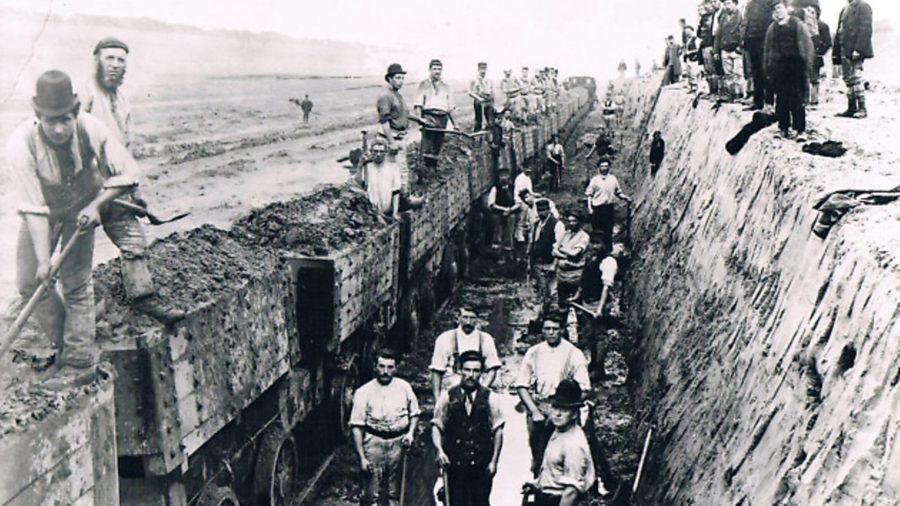 Building the canals was one of the toughest jobs. We often hear about the famous engineers, but what about men actually doing the construction work?

One often reads that a canal was ‘built’ by Telford, Brindley or some other great engineer. But often they would draw up the original plans and perhaps visit the site a few times a year – and, in the case of Brindley, the canal proprietors were lucky to see him that often.

The actual physical work of construction was usually handed out to individual, independent contractors, who would accept responsibility for building a specified length of the waterway. They in turn would employ the workmen who would do the actual building: there would be skilled craftsmen, such as carpenters, masons and bricklayers, but above all there would be a huge number of labourers. Because they built navigable waterways, they were originally known as navigators, but that was soon shortened to the familiar ‘navvies’.

A typical contract on the Oxford Canal of 1770 called for John Watts to complete a specified length of canal at a rate of £350 per mile and to build two ‘Wagon Bridges’ of brick with stone copings for £210 for both. So who were these contractors? That’s not an easy question to answer. They varied enormously from the very small concerns to major companies, taking work on a whole range of canals at the same time.

A contract for the Brecon & Abergavenny Canal, for example, went to a consortium consisting of William Perry gentleman, Thomas Powell shopkeeper and William Watkins, labourer. The first two would have supplied the money and equipment and Watkins the experience of actually doing such work.

At the opposite extreme was Hugh McIntosh, who had offices in Bloomsbury, London and who described himself as “Contractor for Public Works”. In 1823 he was given the job of completing the Gloucester & Berkeley Canal for a total cost of £111,493 15s 11d: it is a curious feature of contracts at this time that they were often estimated down to the nearest penny – even though, in the event, they might turn out to be hopelessly inaccurate.

The system suited the canal companies, who were spared the expense of purchasing all the equipment needed for construction, had no need to bother about hiring men – and did not have to worry about things like paying wages.

There was, however, a downside to the arrangement. The canal company wanted a waterway in which everything was completed to the very highest standard, no matter how long it might take. The contractor wanted to get the job finished as soon as possible: the longer it lasted, the more he had to pay out in wages and the lower his profits.

One set of canal records gives a very good picture of the conflicts that could arise, in this case between the Lancaster Canal Company and the contractors, Pinkerton and Murray. When work began on the canal in January 1793, everything seemed to be going very well, with crowds of navvies turning up for the work, and soon cutting was going ahead on many miles of excavations. But soon, troubles started to appear.

In their anxiety to push ahead, the contractors asked to be allowed to start on the next stretch before the first was finished: the canal committee refused. Pinkerton and Murray had announced they would supply stone from a particular quarry, but that turned out to be unsuitable and, as a result, all the masonry work was held up. Worse was to follow. The company secretary wrote a stinging rebuke in a letter of December 1793.

“The ‘Come’ are sorry that they have had reason to observe that the General tendency of your Management is to get the works hurried on without regard to the convenience of the public, the loss of the land occupiers or the advantage of the company. You seldom provide the necessary accommodations before you begin to make the Bridges, and in the excavations you place your own in so many various places without either finishing as you proceeed or making your fence, wall & posts & railing – that the whole Country is laid open to damage. This grievance which has already caused so much trouble and expence is so very obvious & so much owing to your neglect that the company will no longer suffer it.”

The litany of complaints continued throughout the construction period, and the engineer Rennie wrote to sympathise with the hard pressed secretary, commenting: “I am not surprised at your being out of patience with P & M. I think it would be a hard business for Job himself.”

Of course, not all contractors behaved badly: many simply got on with the work in hand. We know about when things went wrong, because those are the events that were recorded: no one wrote to contractors to say they were doing well. The same applies when we come to look at the men who did the hard work, the navvies.

At the start of the canal age, local workers were employed: the Duke of Bridgewater, for example, was able to call on miners from his Worsley colliery to dig his canal. But as more and more canals were begun, the men who had worked on the first had developed strengths and skills that enabled them to earn far better wages than ordinary labourers.

When the Rev. S. Shaw visited the works on the Basingstoke Canal he found that although the contractor wanted to employ local men, they were not able to keep up with the experienced navvies who had come from other workings. The professional navvy had arrived.

A contemporary account stated that an experienced navvy could shift 12 cubic yards of earth a day: that’s the same as digging a trench 3ft wide, 3ft deep and 36ft long every day. And it was not always that simple. In deep cuttings, there was a problem getting the spoil up to the surface, so barrow runs were used.

A barrow would be filled and then attached to a rope, at the other end of which was a horse. As the horse walked away, the barrow would be hauled up narrow planks to the top of the cutting. The navvy had to balance this load, while keeping his footing on the planks, greasy with wet clay. He came back down at a run, with the barrow behind him.

If he fell, which was not unusual, he had to try and throw himself to one side while pushing the barrow the other way to avoid being buried under a heap of earth. The navvies were the highest paid manual workers in the land, but they earned their money. The navvies worked hard and lived hard. There is very little information on where they came from, though they were not, as popular history has it, mainly from Ireland, though some were. They remain anonymous: when a man was killed in the workings, the official report couldn’t even find out his name, but merely referred to him as a man from Shropshire.

The men got accommodation when and where they could. It was only rarely that they had a proper building to live in: an exception was the work on Sapperton tunnel on the Thames & Severn. There the men were housed in a special barrack-like building which, when work was over, became a pub, which it still is today, the Tunnel House at Coates.

Elsewhere the men had to live in makeshift shanty towns. Unsurprisingly, they were always outsiders in communities where they settled, and developed a reputation for riotous behaviour. One contemporary called them ‘ungovernable banditti’, but as with the contractors, we mostly hear about their behaviour only when things got out of hand.

Although the navvies were paid better than other labourers, there were often special difficulties. Some contractors, instead of paying coin of the realm, paid in tokens that in theory could be used in exactly the same way. But sometimes local shopkeepers and innkeepers were unwilling to cash them.

This happened at Sampford Peverell on the Grand Western Canal in 1811. A crowd of around 300 angry men were gathered in the village, unable to get the money they needed. They came across a notorious local, Mr Chave, who had been involved in a scandal involving a fake ghost that he charged people to see, and decided to take their anger out on him. Chave was terrified, took a pistol and fired into the crowd: one navvy was killed instantly and another fatally injured. The end result was a major riot. It was one of the blackest days for rioting in canal history.

There were other riots, but they were far from typical of the working life of the navvy. In the final reckoning these were the men who built our canals using nothing but their own strong arms, and the simplest of tools, just pickaxe and shovel. They did a job few others could even contemplate, and even fewer would be able to manage. The canal system we have today is due just as much to their hard work as to the planning genius of the more famous engineers.