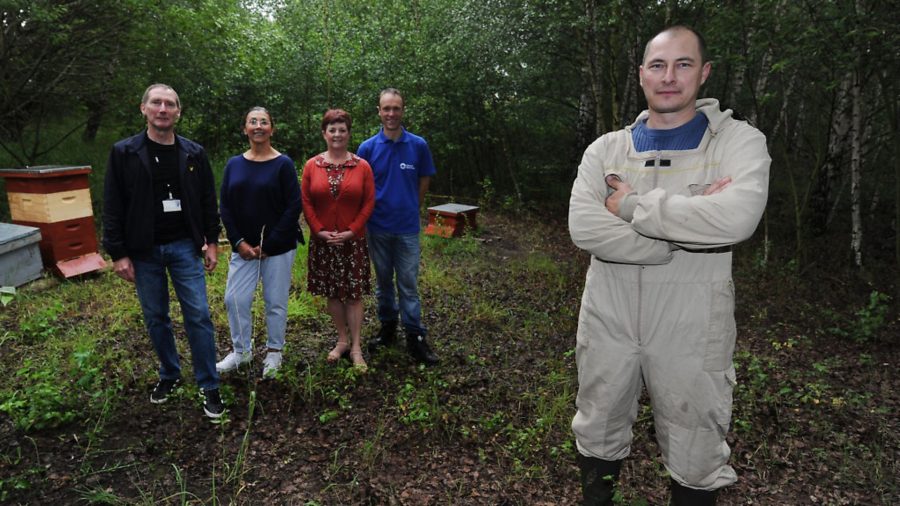 A rapidly growing new community is creating something of a buzz around Rotherham.

The Rotherham East Community Bee Farm was set up on land provided by Canal & River Trust, the waterways and wellbeing charity that cares for the Sheffield & South Yorkshire Navigation. The farm has enjoyed a successful first summer, with four new colonies now well-established and enough honey produced for the insects to survive the winter.

Jonathan Hart-Woods, ecologist at Canal & River Trust added: “It’s great to see how well the bees have settled into their new home. Our waterways are green corridors that provide a range of valuable grassy, flower-rich habitats where pollinators such as bees and butterflies can thrive. Bee numbers are in decline across the UK, through loss of flowery habitats and the use of pesticides on farmland.

“Our charity is working hard create safe, bee-havens along our waterways – supporting community beehives, planting community gardens, creating bee hotels and changing how we mow and manage our verges along towpaths.”

The project is being overseen by Rotherham Metropolitan Borough Council (RMBC) who helped experienced beekeepers Claudiu and Marianna Barbu create the bee farm when they settled in the town on arrival from Romania.

Chris Gaynor, Neighbourhood Co-ordinator for Rotherham East, said: “Thanks to the support of Canal & River Trust, which provided the land to locate the beehives, we have been able to realise this great project which has so many positive implications for both the community and our local wildlife.

“It’s been incredibly well-received, and we’ve had so much support in getting it started. We’re now seeing a lot of interest from people wanting to get involved or set up similar projects things elsewhere in the ward.”

The site was prepared by staff and volunteers at Canal & River Trust in April, including steps being cut into a bank to allow easier access. RMBC ward councillors Wendy Cooksey, Tajamal Khan and Deborah Fenwick-Green also supported the project by purchasing four hives from their devolved budget.

Sean McGinley, Yorkshire & North East director at Canal & River Trust, said: “This is a fantastic project that brings benefits to both the local community and the wildlife, and makes good use of this waterside space. Research tells us that time spent by the water can help us all to feel happier and healthier. Canal & River Trust has supported other hives including at Standedge Visitor Centre in Marsden, near Huddersfield, and Tees Barrage. By supporting projects like this we can encourage even more people to get to know their local waterway and the benefits being by water can bring.”

In May, Mr Barbu placed two of his own, existing hives, on the site and from these ‘hived off’ workers to attend queens in the new ones. The workers accepted the new queens and each hive now has around 30,000 to 40,000 bees, producing over 35kg of honey. The honey won’t be harvested until next year as the beekeepers want to give the hives time to develop, and the bees need the honey to survive the winter. However, next year some of the honey will be used by the nearby Clifton Learning Partnership for their community café, and the Partnership also plan to have their very own hive on the site.

The bees will be given another boost next Spring as the Sheffield and Rotherham Wildlife Trust is planning to plant part of Eldon Road fields with wild flowers as part of their Natural Neighbours project.

According to Friends of the Earth, 35 UK bee species are under threat of extinction, with all species facing serious threats.