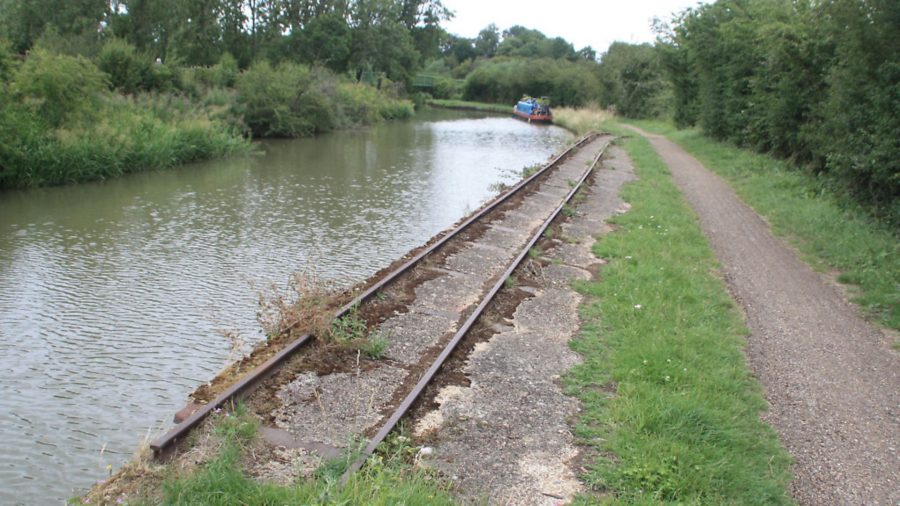 Martin Ludgate shows us which canals you can still find narrow gauge railway tracks on, and explains what they were originally used for…

The Inland Waterways Association is running a campaign to highlight hidden and often overlooked aspects of our waterways heritage – to find out about it, download a heritage spotter’s guide and see a gallery full of lots of photos of hidden heritage from around the waterways network, click here.

Railways are seen as the rival transport system that took the canals’ trade away, but there are examples still to be found of rails which once served the waterways network

Cruising southwards along the Grand Union Canal from Leighton Buzzard towards the next lock at Grove, you might notice a relic of another historic transport system on the left bank. You’ll certainly notice it if you’re walking the towpath: a length of narrow-gauge railway track running along the water’s edge for a few yards before veering away towards the towpath hedge.

Similarly, if you happen to be on the Montgomery Canal heading south from Welshpool (and in this case you’ll almost certainly be walking on the towpath, until the glorious day when progress with restoration work finally allows boats from the rest of the network to visit this currently isolated length) you might spot a similar length of track. It too is narrow gauge, and runs along the very edge of the canal for perhaps a boat’s length before turning away.

What are narrow gauge railway tracks?

If you’re familiar with local railways, you might wonder if these rails were in any way connected with either the Leighton Buzzard Narrow Gauge Railway (a former industrial line now preserved as a heritage line running passenger services) or the Welshpool & Llanfair Light Railway, a public narrow gauge line rescued from closure in the early 1960s and now one of the ‘Great Little Trains of Wales’. But, in fact, neither of them were: they were a couple of short local systems unconnected to anything bigger.

The Grovebury Quarry railway system at Leighton had no direct links to the LBNGR (the two systems were physically separated by a mainline railway) but it was built to the same gauge (2ft) and to serve the same purpose: transporting sand from nearby quarries. The system changed shape over the years as old pits were worked out and new ones open, the system also served a local tile works, and the trains of wagons were hauled by a small fleet of Simplex industrial petrol or diesel locomotives. At its greatest extent it stretched no more than a couple of miles, the connection to the wharf was last used to load boats in 1965, and the final part of the railway ceased operation in 1969.

The line at Welshpool was even shorter. Less than 100 yards in total, it simply linked the wharf to the adjacent canal maintenance yard from when the yard opened in the late 19th century, enabling goods and materials arriving by canal to be carried into the yard buildings (some of which still survive in industrial use), or taken from the yard to be loaded onto boats for use elsewhere on the canal. It would have been typical of many of the shorter lines all over the country, often lacking any form of motive power other than a horse or manhandling of wagons.

Including all these tiny local and internal lines there were probably more than 1,000 narrow gauge railways altogether in Britain. Not surprisingly plenty were associated with waterways.

At this local level, these small-scale railways (often referred to as tramways or tramroads in the early horse-drawn days) weren’t the newer, faster ‘enemy’ of the canals that the main lines are often seen as. They were a useful adjunct to them, connecting canals to nearby industries or sometimes further afield, and varying from the small local examples described above to some quite extensive systems (especially those built in connection with the South Wales canals) running many miles.

I’m not going to attempt to give you a detailed history of this interesting but less well-known facet of railway history (if you’re interested, try the Industrial Railway Society for starters, and there are plenty of books covering every last aspect of the subject – I once bought a friend a copy of The Lincolnshire Potato Railways!) But to whet your appetite here are just a few more examples that you can spot while you’re out and about on the waterways, concentrating on the ones where the rails are still in place…

Where can I spot narrow gauge rails on the canals?

The Grand Union Main Line seems to be particularly good for tracking down narrow gauge rails in situ. Just under 20 miles north from the wharf already mentioned near Leighton Buzzard is another example at Cosgrove. Just above the lock, a set of 2ft gauge rails are set in surface of an old wharf on the towpath side of the canal, in a roughly triangular layout: a line of rails runs along the edge of the canal, with a set of points at each end of it leading to tracks curving away from the canal and towards each other before coming to an abrupt end after a few yards.

A 1900 map marks a ‘tramway’ extending from here for barely 100 yards to a nearby clay pit; however in the 1930s and later it grew to a more sizeable system, also operated by a Simplex locomotive, and serving several quarries worked by the Cosgrove Sand & Gravel Company. The quarries closed down around 1960 (one of their last jobs was supplying materials to build the M1) and the pits now form the series of lakes surrounded by caravan sites visible from the canal.

Almost hidden in the grass by the two Gas Locks, just north of Berkhamsted and sandwiched between the Grand Union Canal and the West Coast Main Line railway embankment, is a length of 18½ inch gauge track that’s a remnant of a much smaller operation (and one not directly connected with the canal). This was the Berkhamsted Gasworks Tramway, which carried coal for a few hundred yards from the goods yard by the railway station (on the far side of the line) via a tunnel-like bridge (which can still be seen) under the railway embankment and then alongside the canal to the gasworks which was above the upper lock. Horse-operated to the end (latterly by a mare called Ruby), it was in use from when the gasworks moved there from nearer the town centre in the early 20th century, until the works ceased production of gas in 1955.

Finally on the Grand Union, Bulbourne lock gate workshops had a few yards of rails that they still used for manoeuvring completed lock gates around on trolleys until they stopped making gates some 15 years ago; whether the rails survive the recent redevelopment of the site I do not know.

Moving elsewhere, given its industrial history it’s not surprising that a few examples of industrial railway tracks can be spotted alongside the Birmingham Canal Navigations and other waterways of Birmingham and the Black Country. But all is not necessarily what it seems: the tracks set in the towpath of the Worcester & Birmingham Canal between Gas Street Basin and the sharp right-angle bend at Salvage Turn may look authentic, but it turns out that they were moved here as a ‘cosmetic’ addition forming part of improvements to the towpath in the not-too-distant past, having apparently come from a former industrial site nearby.

But for the real thing, head along the BCN New Main Line for some way and you can find a small wagon turntable and an adjacent few yards of rails still in position on the left-hand towpath (as you head out of Birmingham) near Smethwick.

Back in Wales, the Llangollen Canal too has an example of narrow gauge railway tracks: at Trevor, by the west end of the famous Pontcysyllte Aqueduct, a line of rails runs along the wharf for some distance, splitting into two to form a passing loop. Here, an early horse tramway, opened in the early 1800s, connected the wharf to coal mines at Wynn Hall, some two miles to the north. In the 1860s it was rebuilt to standard gauge and and became a freight branch of the mainline railway network, later extended to Wrexham; the original section closed in 1953. However the rails on the wharf now are narrow gauge: a fragment that somehow survived from before the 1860s rebuild (I’m not sure they look that old), or a modern re-creation?

Two oddities to end on

Finally, a couple of oddities: the Bude Canal, an isolated Cornish waterway mostly long-abandoned but remarkable for many things – its six inclined plane boat lifts, its box boats fitted with wheels (so they didn’t have to be loaded into cradles or tanks to negotiate the inclines) and its tidal-lock leading straight out into the sea in Bude – also featured an unusual narrow gauge tramway. The rails can still be seen running alongside the canal above the sea lock, then sloping down by the beach, where sea sand (used for improving the fertility the local soil) was loaded into wagons hauled by donkey to be transferred to boats. Three years ago Heritage Railway magazine reported that more old track panels leading further out into the sands had been uncovered.

And on the Yorkshire Ouse, as last year’s February flood waters receded they surprisingly revealed some 18in gauge tracks on the river bank near the Millennium Bridge a mile south of York, the silt which had buried them for many years having been washed away by the flooding. They are the remains of a horsedrawn line which once delivered military supplies and explosives from the wharves on the river to an army barracks at Fulford.

As I said earlier, these are just a roundup of canalside sites where narrow gauge rails can still be seen. For those keen on industrial archaeology there is plenty more to be found – from remains of old rope-worked railway inclines by the Monmouthshire & Brecon Canal to the major canal/tramway interchanges at Bugsworth Basin on the Peak Forest and Froghall on the Caldon, or odd little survivals like Bridge 41 a little way east of Llangollen, with a small second arch which once spanned a horse-tramway. Happy spotting!