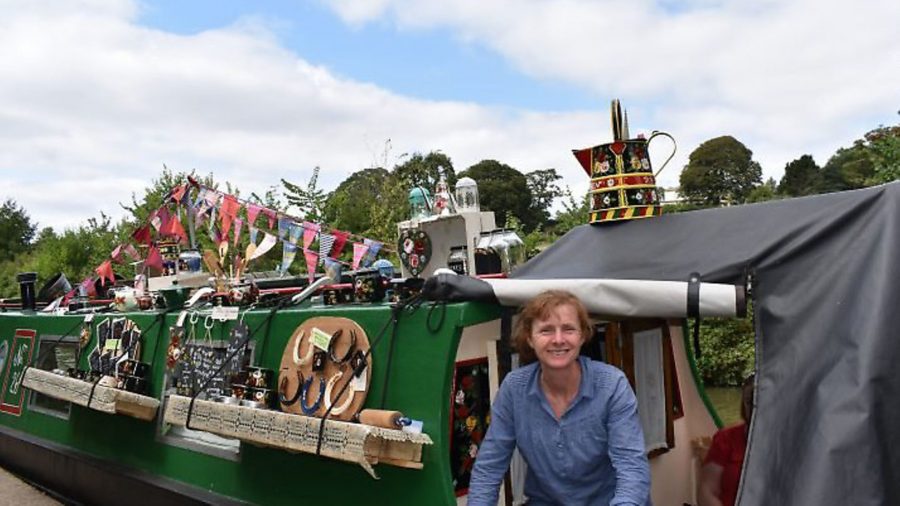 In the mid 2010s Kay Andrews was a University College London lecturer on Holocaust studies. These days she owns a 32ft Farley narrowboat and is now a professional painter of ‘roses and castles’ narrowboat decoration.

Having left UCL, she’d spent a year living and working in Los Angeles, returned and embarked on a PhD course. On a whim she bought Pea Green, a 1973-built, Sabb powered Farley narrowboat. Discovering that the PhD wasn’t for her, she started painting ‘to sort of decorate my boat,’ and this led to her career and lifestyle change.

Kay freely admits that she didn’t exactly do the right things when buying her boat.

“I completely struck gold. I knew absolutely nothing about narrowboats when I saw my boat on the Pre-Loved website and thought it looked quite attractive.”

She visited Pea Green at Oundle Marina, and despite an engine that wouldn’t start and water in the bilge, she was smitten and bought it without a survey – although to be fair it had had one of those in the quite recent past.

“I’d never been to a marina before, but I was just enthralled with the wildlife. When you’re on board a narrowboat your feet are below the waterline, and I was captivated by that.”

This could have been a recipe for disaster, but Pea Green was essentially sound. Kay was equally fortunate in finding a mooring.

“I looked on Google Maps and followed the canal to find where the marinas were.

She discovered Welford Marina, which at the time didn’t even have a website. It did however, have a vacant berth and was just 20 minutes from Kay’s Northamptonshire home.

This was in 2017 and Pea Green has since been out of the water for a repaint and some welding, had its wiring upgraded and passed a fresh survey. Kay improved her carpentry skills on the interior, which she describes as ’a bit like a 1970s caravan’.

Getting into Roses & Castles painting

While all this was going on she became interested in Roses & Castles art, both from a painter’s and historian’s perspective, took it up and eventually had tuition from Julie Tonkin whose knowledge “lifted my game, basically,” said Kay.

As a Roving Canal Traders Association member pre-lockdown she would operate as a pop-up trader and has been kept busy with online sales.

Kay has been as far as Stoke, but crewing single handed, and needing time to find items to paint, and the work itself, proved challenging on occasions.

She travels with Monty, an eight-year-old cat acquired from the Cats Protection League.

He apparently tolerates the boat, and after hurling himself over the stern close to the prop, stays on board, aided by a ready supply of Dreamies cat treats.

Kay has a sense of modified rapture when it comes to chemical toilets, but otherwise loves the life.

“I’ve travelled extensively overseas, but the boat has taken me to parts of the country I’d never normally visit. That’s great and so is being close to nature.”

Check out her work here: kayscanalcraftyarts.co.uk