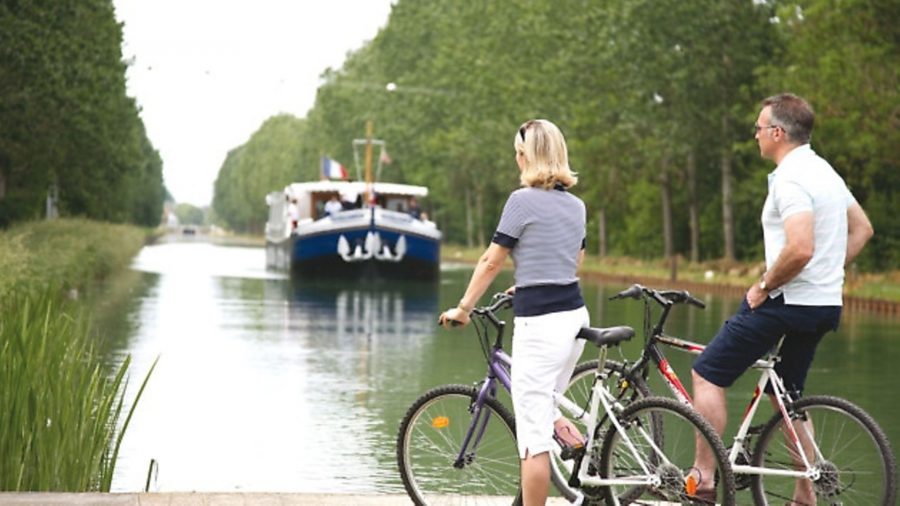 Burgundy’s canals are part of its heritage and provide an opportunity to explore the region’s culture and history at a leisurely pace, as Eleanor O’Kane finds out while also enjoying its wines and cuisine.

Curious charolais cattle slowly raised their heads, eyeing our kir royale apÉritif as they stoically chewed; a leisurely cyclist overtook us; the inhabitant of an old stone relais gave us a wave and, in the distance, a picture-perfect chÂteau with round towers topped by pepperpot roofs reflected the sun. Travelling by barge on the Canal du Centre, we were experiencing Burgundy at a snail’s pace.

We were enjoying life aboard the Amaryllis, a splendid 40-metre barge with a deep blue hull and a shining wooden deck adorned with flower pots. As a four-bedroom pÉniche hotel operated by Afloat in France, it had all the comforts of a luxury pad with the added bonus of ever-changing views from its windows and a friendly crew of six on hand to make our sojourn as pleasurable as possible. With our own gently heated pool on board, we could even enjoy the ride while cooling off on deck.

As one of Afloat in France’s five pÉniche hotels, covering Provence, the Rhône Valley, Languedoc-Roussillon and Burgundy, our cruise took us along the Canal du Centre, which links the rivers Loire and Saône. Built between 1783 and 1793, the 112-kilometre waterway has 61 locks and winds through pastures of farmland and vineyards as it reaches the Côte Chalonnaise in its eastern reaches.

Built during the 18th and 19th centuries, the Burgundy canals once provided a network for transporting wine, wood, wheat and stone; it is now less business and more pleasure as modern-day leisure cruisers explore the region in a gentle fashion. Our starting point was the historic town of Paray-le-Monial, reached via a scenic trip through the Loire Valley and the famous vineyards of Sancerre after arriving in Paris by train. As we boarded the Amaryllis on a peaceful sunny evening, we were welcomed with a champagne apÉritif on deck, the low sun reflecting in the calm water. Our trip began in elegant style with a delicious menu that included Burgundy’s renowned charolais beef and specially matched local wines.

Our guide for the week’s excursions was Michael Pattison from Scotland, who settled in the region several years ago and proved a fountain of knowledge when it came to Burgundy wine, architecture and history. Speaking before dinner he patiently and passionately explained the complex wine labelling system, revealing the important role viticulture plays in this part of France.

Breakfast on the Amaryllis © Ryan Davis

Back on dry land

Next morning after a hearty breakfast (it’s impossible to get sea sick on a canal) we stepped ashore to visit one of the most popular tourist sites in France, just minutes from the towpath. Michael explained that southern Burgundy is renowned for its Romanesque churches and abbeys, which flourished due to the influence of Cluny, the medieval capital of monasticism. From the 10th to the 14th centuries, Cluny, with its magnificent abbey church, was the beating heart of Christianity in Western Europe. The abbey was destroyed during and after the Revolution, leaving the surviving basilica at Paray-le-Monial, with its pure Romanesque architecture, one of the finest of the Cluny offspring. The original church at Paray was built in the 10th and 11th centuries and restored some 900 years later. The exterior is notable for its enchanting figurative stonework, reminiscent of Islamic architecture. In those days, stonemasons would travel around Europe from one job to another and perhaps those who worked here had been influenced by foreign styles. Twinned with Bethlehem, Paray-le-Monial is also on the Chemin de Saint-Jacques de Compostelle and, over the centuries, thousands of pilgrims have hesitated in the entrance, as we did, to quietly contemplate before entering the church to feel humbled by its 21-metre-high ceilings, soaring stone pillars and luminescent golden stone interior. As we left the church a stream of people were flooding in for morning mass, continuing a tradition that has endured here for more than a thousand years.

After our morning’s sightseeing, a peaceful afternoon on deck sitting in the sun with a glass of wine in hand beckoned, while others took the opportunity to explore the towpaths with one of the on-board bicycles. Burgundy is developing a regional cycling network, with plans for 800 kilometres of cycle track. Many of the region’s towpaths are already part of the network and are being transformed into voies vertes, where mechanised vehicles are banned but cyclists, walkers, rollerbladers and pushchairs are welcomed. In addition, routes are being developed on disused railway lines, through vineyards and along rural lanes. So far, 560 kilometres have been developed with the work continuing all the time. A section of voie verte along the Canal du Centre between Paray-le-Monial and Chalon-sur-Saône will also form part of the EuroVÉlo 6 cycle route, taking in ten countries and linking the Atlantic to the Black Sea.

Our next land-based adventure took us to the flamboyant Gothic finery of the Hospices de Beaune. Home to the Dukes of Burgundy until the death in 1477 of Charles the Bold (or Charles the Terrible to his enemies), the town of Beaune is encircled by sturdy 15th-century walls. In 1443, a rich local, the Chancellor Nicolas Rollin financed the building of the hospices, a majestic almshouse that includes the spectacular Hôtel-Dieu building. Now it’s a major tourist attraction and after entering through the rather imposing doorway, we emerged into a wide courtyard of buildings topped by roofs of gloriously colourful glazed tiles for which the Hôtel-Dieu is famed. Equally astonishing to behold is the Grand’Salle, the 72-metre-long ward with its wooden roof like an upturned keel of a boat, painted cross beams and orderly rows of beds with crimson curtains, each of which accommodated two patients sleeping top to tail. Such is the splendour of these buildings, it is hard to comprehend that they were once a hospital and in use until 1971. The tour leads you through one extraordinary room after another, including the pharmacy with its jars large and small of mysterious potions and powders.

Rollin’s generosity stretched to the donation of a prestigious vineyard and over the centuries the Hospices acquired gifts from other rich Burgundians, cementing its relationship with the local people and terroir. Each year on the third Sunday of November, a world-famous charity auction is held amid three days of merrymaking, known as Les Trois Glorieuses. Barrels of wine from the Hospices’ vineyards are auctioned off to raise money for the modern hospital and the maintenance of the Hôtel-Dieu.

It was the Cistercian monks who first planted vines in the 12th-century and, from Chablis in the north to the sun-soaked Beaujolais at its southern tip, winemaking is an inherent part of the culture in Burgundy. On board the Amaryllis our wine education was second-to-none and we were treated to different regional wines to complement the delicious dishes we were served. The menu included seasonally and regionally inspired courses as well as our chef Marcelo’s own personal creations, which sparked many a food-inspired conversation, such as a flavoursome starter of marinated mozzarella and a piña colada-inspired dessert. During the cruise, a series of heavily laden, ever-changing cheeseboards allowed us to indulge in many of France’s finest, including the heady Époisses de Bourgogne originally produced by the Cistercians. Noted for its pungency, it is made from unpasteurised cow’s milk and its rind is washed in marc, a brandy made from pulp, seeds and skins left over from the winemaking process, which added to its distinctive flavour.

While Burgundy’s place at the centre of religious power led to a boom in the building of its churches and abbeys, it was the aristocracy and wealthy merchants who built its chÂteaux and fine houses. The ChÂteau de Cormatin has everything you could wish for in a romantic chÂteau: a moat, turrets and a peaceful topiary garden complete with maze. Built in the 17th century, the original has changed over the years through deliberate modification and an accidental fire, and during the last century the castle fell into ruin. In 1980, three French historians – Anne-Marie Joly, Marc Simonet-Lenglart and Pierre-Albert Almendros – who met while working at the National Archives, bought the castle and have been painstakingly restoring it ever since, investing their own money and, in the beginning, taking on the mammoth tasks of repairing the roofs, painting the building and fixing the electrics before calling on specialists for the art restoration.

When the house was built, the finest craftsmen of their time were employed to copy the lavish interiors of Paris’s finest houses and the guided tour reveals rooms of beamed plafond à la française ceilings, Gobelin tapestries, shimmering lapis lazuli and gilded detailing, designed to leave guests in no doubt as to the wealth and good taste of their original host. The gardens, with topiary and a maze have also been beautifully re-created and include a 300-year-old oak tree. When they first opened to the public in 1981, the three historians welcomed 6,000 visitors. Now around 70,000 people visit each year – a happy ending for the fairy-tale chÂteau.

While the pace was leisurely, our days aboard the Amaryllis passed all too quickly and soon our exploration of the Canal du Centre and the surrounding countryside was coming to an end. On our last evening we raised a glass of chilled Saint-VÉran to the Amaryllis and its crew who had taken us on a voyage of discovery. In nautical miles our journey might have been modest, but we had travelled through centuries, savoured some wonderful cuisine and experienced a wine-tasting tour at the dinner table, all the while gently cruising along the Canal du Centre. When you can discover so much while taking it easy, who needs speed? Like its fine wines, Burgundy is definitely best savoured slowly.