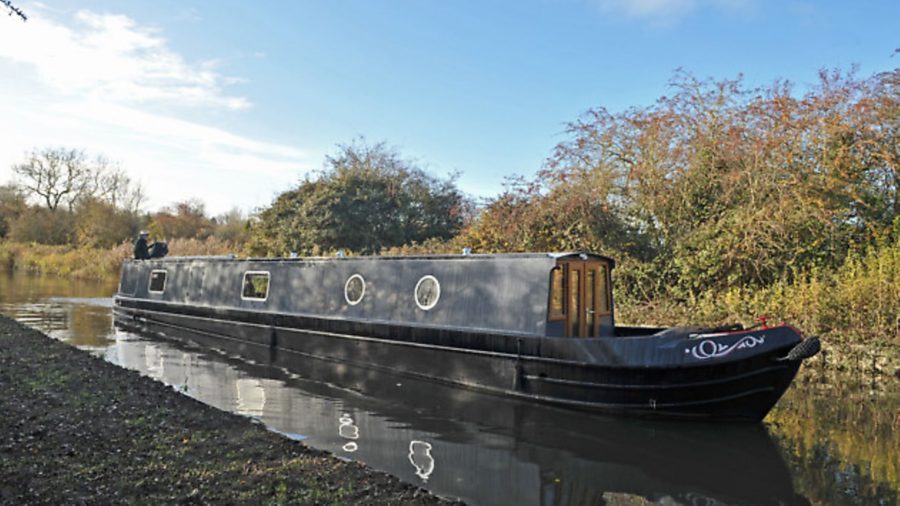 You probably won’t have heard of Ortomarine before, but the chances are you’ll be hearing more as their first private boat shows

Diversification is a current business buzzword – moving into a different area to expand your company and possibly protect yourself should your original area go into a downturn. It’s particularly good if you can make better use of existing assets or skills, which is why farmers are putting glamping tents on their land and Apple has used its computing skills to make smart phones.

So when we heard that a firm making electronic control systems for everything from the gas industry to crumpet production lines had started building narrowboats, we were intrigued to say the least.

Frankly, it didn’t seem a particularly good fit. But closer investigation revealed that the company was, in fact, just making good use of skills it already had. That’s because Caroline Badger and Rob Howle had taken on Rob’s brother, Dave, as an engineer when he took redundancy from one of the biggest hire boat companies after more than 20 years’ service.

Dave was soon being approached by some of his previous contacts who asked if he could built them some replacement hire boats. And so the diversification happened.

Now, after building four hire boats, Ortomarine has built a couple of private boats for sale, of which this is the first to be finished. The aim was to produce a solid, British-built boat for less than £100,000, but also to include some of the high-tech electronics the parent company is known for. Quite a challenge.

Ortomarine were determined that their boats would be built on good quality shells, so they turned to Tyler Wilson, one of the biggest and best known names in the industry. This boat is based on one of Tyler Wilson’s Mike Christian shells, the name they give to their standard builds.

It means there are fewer frills, although the build quality and attention to detail remains the same. So while you don’t get a boatman’s beam or scrolls at the end of the handrails and cants (the ends are rounded instead, in a non-fussy but attractive way), there’s still a very pretty Josher-style bow and a Birmingham square shape to the hull, which provides more space inside.

What you also get are things such as the chute-style weed hatch which means you can’t sink your boat by failing to secure the hatch properly, and long swims which contribute to the legendary Tyler Wilson handling.

Ortomarine uses Andy Edwards from Forge Studio in Dunhampstead to hand-paint the boats and the finished result looks excellent. This one has a nice shiny finish and looks classically elegant in a dark grey, while the chrome trim produces a contemporary look.

On the roof, as well as the usual plank and pole stand there’s a long solar panel. There’s also a very discreet internet antenna, which looks like a small dome.In the nose there’s a spacious gas locker, while the water tank is under the well deck. The well deck itself has lockers both sides for storage and to provide somewhere to sit.

This is a reverse layout boat, with the galley at the stern. Next comes a large saloon with a freestanding dining table. A generous walk-through bathroom follows, with the cabin at the bow.

The fit-out uses a moisture-resistant MDF board below the gunwales, routed to look like tongue and groove and painted white. Although many people worry about MDF in boats, evidence suggests that it actually stands up to water just as well as plywood, if not better.

Above the gunwales, the cabin sides are covered in a marine vinyl, the sort of thing more normally seen in yachts. It has a leather finish and is padded, producing a feeling of luxury and warmth. The trim is solid oak.

One of the real strengths of this boat is the sense of style. All the fixtures and fittings are good quality and it looks and feels like a designer boat.

Steps bring you down inside from the semi-trad stern. On one side an airing cupboard has the calorifier underneath, while on the other side there’s an open space with hanging for coats.

To achieve the sub £100,000 price-tag, the galley is made from a kit, but don’t imagine this is just an off-the-shelf flat pack, it’s not. Instead, the design for the galley was drawn up and sent for all the parts to be cut by computer. This meant the good quality units fitted properly, but took a lot less time to put together. And, as is often said, time is money.

There are plenty of cupboards, all with oak-style doors, and some clever touches such as the microwave being built in to the side of the full-height cupboard, to save worktop space. There’s also a built-in wine rack and a rack for mugs and glasses. The worktops are laminate and the sink is very stylish. It’s round, black, with a built-in drainer, and made of a quartz composite that’s very strong and won’t scratch. To maximise workspace, a cover goes over the sink.

Equipment includes a full-size Thetford Caprice oven and hob, and a 12-volt Lec Inlander fridge. A nice touch is LED lighting under the gunwales, which washes the worktops with light, and brushed steel light switches and sockets. The windows have blinds from John Lewis, and to avoid the need for retaining bars or hooks, there are magnets in the blinds and the window trims. The floor is a luxury vinyl tile.

The saloon is a large and flexible space, left for loose furniture rather than built-in items. However, the boat has been designed so that a Pullman dinette could be added straight after the galley.

As it stands, this boat has a John Lewis table and benches; these have cushions, which can also be used on the lockers on the stern or bow decks. Opposite the table there’s a side hatch. The sofa bed comes from Ikea and converts easily into a bed without having to be moved. It is on the large size but, of course, the beauty of freestanding furniture is

Opposite the sofa, a handmade under-gunwale unit houses a DAB radio and a smart TV. Of the other little cupboards, one contains a Wi-Fi router, while one at the top flips down to reveal a touch-screen control for the boat’s monitoring system (about which there’ll be much more later). There’s a cupboard in the corner of the saloon, but this could easily be replaced by a solid fuel stove.

This is one of the most spacious shower rooms we’ve seen. It’s a walk-though design, which always adds space, but this one is also almost seven feet long. The shower is a 900 x 760mm quadrant, so it also offers lots of room, and it’s lined with a shower board. Alongside there are shelves below the gunwales, which also give access to the shower pump.

The vanity unit, by Roca, has grey high gloss doors. A matching unit has been slotted under the gunwales on the opposite side. The basin is large and has a stylish waterfall tap, while the splashbacks are made from glass mosaic. There’s a shaver point and a mirror that has a demisting heater element behind which comes on when you switch on the light above.

The loo is a Jabsco macerator with the holding tank immediately behind, under the bed. This means the length of pipe between the two is commendably short. There’s both a radiator and matching towel rail in grey. The doors at either end of the room are kept open by magnets.

Up at the bow, the cabin has an in-line bed with a luxurious and very stylish padded headboard. Above this there’s a high-level cupboard with reading lights (which can also be set to night light mode) and a charging point for a phone.

In the back of the cupboard, there’s access to the workings of the heated shower room mirror; Dave’s hire boat background means he’s tried to make everything easy to get at, just in case they need attention. Porthole bungs have been made to match the headboard. As we said, the holding tank for the loo is under part of the bed, but there’s also room for big drawers in the other part of the base; there’s also longer term storage under the far side of the bed and this area is carpeted.

A large wardrobe provides plenty of space for clothes and there’s also power and an aerial point, so a TV could be hung on the side of the wardrobe. A lower unit sits alongside. The steps up to the well deck lift for storage. Unusually, the bow doors and the windows alongside are uPVC double glazed units. They are less traditional than steel or hardwood doors, but should certainly improve security and draught exclusion. The curtains roll down individually.

In one sense this boat is relatively straightforward technically, with a Beta 43 engine and PRM 150 gearbox, a set up that every boatyard in the country will be familiar with.

The electrical side is relatively modest. There are three 110Ah batteries, plus a starter battery, and a 2kW Victron inverter. A welcome addition is a decent-sized solar panel on the roof. It’s a flexible, low profile, 144-Watt affair that uses the latest technology, so it’s more efficient in low light conditions. Heating comes from a Eberspächer diesel boiler.

Perhaps the most interesting part of the boat technically is the monitoring system, which (as it’s the sort of thing they do all the time) has been developed by Ortomarine’s parent company, Ortomader. The touch screen display in the saloon shows you the state of the batteries, the heating, and the fuel and water tanks.

The system is linked to the internet via a 3G/4G router inside the boat and the small dome antenna on the roof. This means you can do things such as turn on the boat’s heating from your smartphone while you’re still at home or on the motorway, so the boat is warm when you arrive; you can set it to alert you by text or email if the batteries drop to a certain level. You could also be notified if the level in the fuel tank dropped suddenly (which might mean someone was stealing your diesel).

Part of the beauty of the system is that it can be set up in many different ways. It could include an intruder alarm, for example, or the lights on the back deck could be controlled from your phone. Flexibility and adaptability are the key to this bespoke system. The hope is that it will appeal to lots of boaters and be fitted by other boat-builders.

One of Tyler Wilson’s Mike Christian hulls paired with a Beta 43 engine is a good combination and almost bound to work well. And indeed there are no surprises. The boat sits in the water nicely, it swims well and the handling is excellent. The main test of that while we were on board was the very extreme turn into the Droitwich Junction Canal when coming north on the Worcester & Birmingham. You almost have to double back on yourself, and this boat managed it with ease.

There’s plenty of room on the stern deck for crew and the lockers give them somewhere to sit. For the steerer, the tiller is at a nice height with the Morse control in the right place. The dials and warning lights are inside the boat, though, so you can’t really just glance

The boat is unnamed

Check out some more of our boat tests here:

A journalist in print and broadcast for some 25 years and a boater for almost as long.